Two in 5 Europeans take a personal interest in food safety and only 1 in 5 say it is their main concern when choosing food. For most Europeans it is one of several factors - together with price, taste, nutrition and food origin – that influence their eating habits and food choices.

These are some of the many insights from a new Eurobarometer survey by EFSA, published on the first ever World Food Safety Day.

World Food Safety Day gives “consumers, producers and governments a chance to focus on an issue that is often taken for granted” according to the United Nations. Our survey results suggest that most Europeans (55%) have a high level of awareness of food safety topics and two-thirds have changed their behaviour as a result of receiving information about food safety issues.

"I am delighted that finally there is a day that marks the importance of food safety and recognises the valuable work of women and men, farmers, veterinarians, agronomists, chefs, and so many more, who work hard every day to make sure that the food that goes on our plates is safe," said Commissioner for Health and Food Safety, Vytenis Andriukaitis. "The results of this study show that Europeans have a high level of awareness of food safety topics and care what they eat. This gives us even greater motivation to continue our work in ensuring that our high standards are maintained and also strive to achieve more sustainable production and consumption patterns."

EFSA Executive Director Bernhard Url said: “It is almost 10 years since the last EU-wide survey on this topic. Society has changed so much in this time and the way we produce and consume food has evolved too.”

The 2019 survey was developed together with EU Member States to take on board new perspectives and ensure closer contact with citizens. It still allows some useful comparisons with previous surveys.

“It is reassuring to see that Europeans are not overly concerned about the food on their plates. I believe this is not by coincidence but rather thanks to advances in science and technology, which have helped to improve food standards and hygiene practices,” added Dr Url.

When food safety is a factor, there is no single concern that predominates in all EU countries. However, there are three issues that surface most frequently in 20 EU Member States or more: the misuse of antibiotics, hormones and steroids in farm animals (44%), pesticide residues in food (39%), and food additives (36%).

These were also among the main concerns reported in the 2010 Eurobarometer on food safety. Yet, Europeans seem less concerned than they were before about issues such as GMOs and new issues such as microplastics have appeared on the food safety radar for the first time. 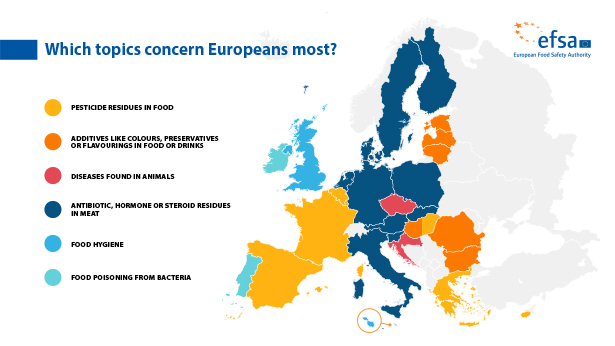 For World Food Safety Day, the UN agencies have highlighted the trust citizens place on governments and producers to keep food safe.

In Europe, scientists (82% - an increase from 73% in 2010), consumer organisations (79%) and farmers (69%) enjoy the highest levels of trust among Europeans when it comes to information on food risks.

Trust in both national authorities (60%) and European Union institutions (58%) are quite high and in line with the 2010 results. However, the report shows that Europeans have quite limited understanding of how the EU food safety system works.

As in 2010, television is the main source of information about food risks for seven in ten of all Europeans. But, whereas more younger people turn to social media after TV (45% of 15-24-year olds), older people opt for traditional sources such as newspapers (46%) and radio (30%).

Dr Url said: “There are positives to take, but we mustn’t be complacent. We need to keep pace with Europeans’ concerns and behaviours, as envisaged in the recent reform of the General Food Law. We should not take their confidence for granted.

“The fact that there is high trust in scientists is encouraging. We can further increase Europeans’ confidence in their food if we better listen to their concerns and improve opportunities for dialogue, so they have a better understanding of the contribution science makes to the EU system.”

N.B. The study revealed important differences across EU countries, which are provided in detail in the report and summarised for all 28 EU Member States in special factsheets (available in English and local languages).


Selected results from the Eurobarometer survey (for the EU average):

(Only if you are a member of the press)

You have a question about EFSA’s work? Contact our Ask a Question service!