Antimicrobials, such as antibiotics, are substances used to kill microorganisms or to stop them from growing and multiplying. They are commonly used in human and veterinary medicine to treat a wide variety of infectious diseases.

Antimicrobial resistance (AMR) refers to the ability of microorganisms to withstand antimicrobial treatments. The overuse or misuse of antibiotics has been linked to the emergence and spread of microorganisms which are resistant to them, rendering treatment ineffective and posing a serious risk to public health. A well known example of a bacterium that has acquired resistance to multiple antibiotics is Meticillin-resistant Staphylococcus aureus (MRSA).

Resistant bacteria can spread through many routes. When AMR occurs in zoonotic bacteria present in animals and food it can also compromise the effective treatment of infectious diseases in humans.

In the field of food safety, policy makers need to protect consumers from risks related to the food chain and to establish the best control options to reduce such risks. Scientists and risk assessors are examining the factors which may lead to the presence of antimicrobial resistant bacteria in food and animals to provide appropriate scientific advice to decision makers.

October 2017 EFSA, the European Medicines Agency (EMA) and the European Centre for Disease Prevention and Control (ECDC) establish a set of indicators to help EU Member States assess their progress in reducing the use of antimicrobials.

January 2017 Experts from EFSA and EMA review measures taken in the EU to reduce use of antimicrobials in animals and stress that there is no one-size-fits-all solution. Successful strategies follow an integrated, multifaceted approach which takes into account the local livestock production system and involves all relevant stakeholders. 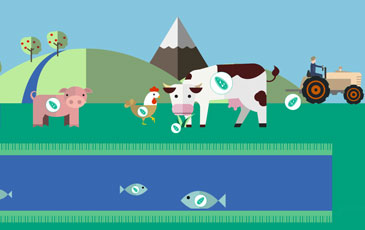 Interactive infographic: How can we reduce the use of antimicrobials in food producing animals?

January 2015 EFSA, ECDC and EMA publish the first integrated analysis of data from humans and animals. Theyconclude that the use of certain antimicrobials in animals and humans is associated with resistance.

Since 2011EFSA and ECDC have been compiling a joint report on AMR in zoonotic bacteria affecting humans, animals and food. This annual report makes an important contribution to work being carried out at European level and supports the European Commission as it develops proposals to fight AMR.

November 2009 EFSA, ECDC, EMA and the European Commission’s Scientific Committee on Emerging and Newly Identified Health Risks (SCENIHR) publish a joint scientific opinion on AMR focused on infections that can be transmitted to humans from animals and food (i.e. zoonotic diseases).

March 2009 EFSA assesses the public health significance of meticillin-resistant Staphylococcus aureus (MRSA) in animals and foods. It concludes that livestock-associated MRSA represents only a small proportion of all reported MRSA infections in the EU with significant differences between Member States.

April 2008 EFSA experts examine how food may become a vehicle for transmitting resistant bacteria to humans and make recommendations for preventing and controlling transmission. EFSA publishes further specifications for the harmonised monitoring of AMR in Escherichia coli and enterococci bacteria in animals and foods.

2007 EFSA publishes specifications for the harmonised monitoring of antimicrobial resistance in two important zoonotic bacteria – Salmonella and Campylobacter – found in animals and foods.

EFSA provides independent scientific support and advice to risk managers on the risks to human and animal health related to the possible emergence, spread and transfer of AMR in the food chain and in animals. EFSA takes an integrated approach to its work on antimicrobial resistance involving a number of its Scientific Panels and Units as it is a concern for the entire food chain.

In its work, EFSA cooperates closely with other relevant EU agencies such as the European Centre for Disease Prevention and Control (ECDC) and the European Medicines Agency (EMA).

Monitoring and analysis of antimicrobial resistance in the food chain

EFSA monitors and analyses the situation on AMR in food and animals across Europe. The Authority is assisted by the Network for zoonoses monitoring data, a pan-European network of national representatives and international organisations that assist EFSA by gathering and sharing information on zoonotic diseases in their respective countries.

Based on data collected by the EU Member States, EFSA produces in cooperation with ECDC annual European Union Summary Reports on zoonotic infections, food-borne outbreaks and AMR illustrating the evolving situation in Europe. EFSA also publishes baseline survey reports on the prevalence of antimicrobial resistance in the EU in specific animal populations, for instance MRSA in pigs, and provides guidance to national authorities how to carry out their monitoring and reporting activities.

EFSA’s Scientific Panels assess the risks of antimicrobial resistance and provides scientific advice on control options at the request of risk managers or on its own initiative. This work has included risk assessments by the Panel on Biological Hazards on antimicrobial resistance in the food and feed chain and the public health significance of MRSA in animals and food focusing on the specific type of MRSA found in food-producing animals. The Panel on additives and products or substances used in animal feed assesses the safety of animal feed additives, including the risks related to antibiotic resistance where micro-organisms are involved.

In June 2017 the Commission adopted the EU One Health Action Plan against AMR, as requested by the Member States in the Council conclusions of 17 June 2016. It builds on the 2011 action plan, its evaluation, the feedback received on a European Commission Roadmap on AMR and a public consultation.

A number of risk management measures to combat AMR are in place related to the food chain. EU legislation on foodborne zoonotic diseases - animal diseases or infections transmissible between animals and humans - obliges Member States to monitor trends in AMR in zoonoses and other agents that may present a threat to public health.

At international level, countries cooperate through an Intergovernmental Task Force on AMR which reports to the Codex Alimentarius Commission. The EU and United States have also created a transatlantic task force on AMR issues.

The European Union Summary Report on Antimicrobial Resistance in zoonotic and indicator bacteria from humans, animals and food in 2018/2019

Antimicrobial resistance in the EU: infections with foodborne bacteria becoming harder to treat

The European Union Summary Report on Antimicrobial Resistance in zoonotic and indicator bacteria from humans, animals and food in 2017/2018